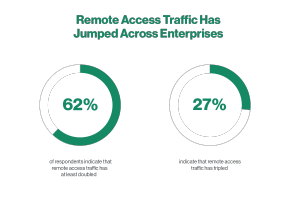 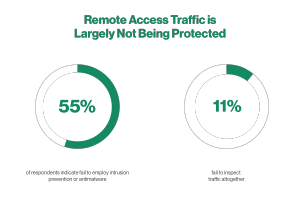 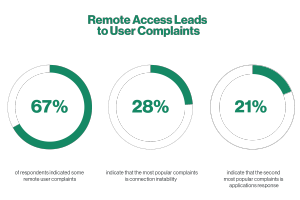 Most companies fail to authenticate remote workers properly or inadequately inspect their network traffic for threats.

A lack of security enforcement on remote access users should be of serious concern for IT managers. Enterprises cannot enable widespread remote access at the expense of security protections.”
— Yishay Yovel, CMO of Cato Networks

The survey assessed the impact COVID-19 is having on enterprise remote access. The survey was conducted in the first two weeks of April and answered by 694 respondents.

But exactly how they’re going to scale remote access to accommodate the triple-digit growth is still an open question. Nearly a third of respondents (31%) indicated they were going to incur the additional capital expense of adding VPN servers or upgrading to a large VPN server. A minority, 14%, indicated they planned on switching to a VPN cloud service. More than half of respondents (55%) indicated that they hadn’t decided how to scale their remote access solutions.

Of critical concern is how enterprises enforce security policies on their expanded remote workforces. The survey found that most respondents fail to employ at least one key measure needed for enterprise-grade security:
• Multi-factor authentication (MFA) for validating user identity,
• Intrusion Prevention for identifying network-based attacks, or
• Antimalware for preventing threats posed by malicious content

While MFA has become standard even among consumers, more than a third (37%) of respondents don’t use MFA when admitting remote users, relying on Single Sign On (SSO) or username and password. As for preventing attacks, more than half of respondents (55%) fail to employ Intrusion Prevention or antimalware. Even worse, 11% fail to inspect traffic altogether.

To compound matters, should attackers bypass authentication measures, they’ll have access to the entire network. Overall, more than half (57%) of respondents indicated that they managed remote user permissions at the network level and not specific applications. For those who did not employ MFA, the number was even higher (63%). The risk of remote penetration is very, very high.

To learn more about the survey and how Cato addresses the challenges posed by widespread, global remote access, read our blog.