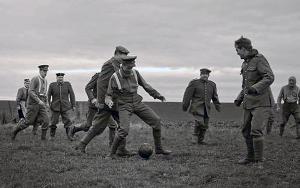 Someone had a ball 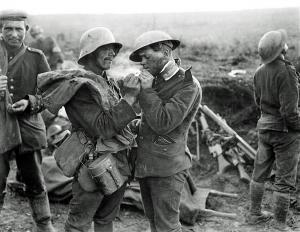 They dreamed of going home

Suddenly, they realized that the Germans were singing the same carols in their own language.”
— Colleen Fliedner

SAN MATEO, CA, USA, December 26, 2019 /EINPresswire.com/ — Nearly five months after the first battle that kicked off World War 1, the battle-weary British soldiers hunkered down in their trenches for another cold, wet night of misery. They dreamed of going home, of being with their loved ones as they celebrated the holiest day of the year for Christians. Some of the men huddled together and began to sing Christmas carols. Others joined in, and soon, their voices broke the night silence up and down the zigzagged ditches. Suddenly, they realized that the Germans were singing the same carols in their own language.
There were even musical instruments accompanying the enemy troops’ voices.

At dawn a truly unbelievable thing happened. One by one, the Germans climbed out of their trenches on the east side of “No Man’s Land,” their hands raised to show they weren’t carrying weapons. They hollered, “Merry Christmas,” in English. At first the British soldiers were apprehensive, thinking it might be a trick. Soon, however, it was apparent the German men wanted a Christmas truce. British soldiers, still leery, slowly emerged from their trenches. Like the Germans, they raised their arms to show they had left their guns behind.

It was truly a Christmas miracle. Troop photographers took pictures of the incredible event. Soldiers who had shot at each other less than 24 hours earlier now shared cigarettes and plum puddings, shook hands and, most impressive of all, played soccer games. Dismayed by this show of friendship by the troops, the officers on both sides weren’t about to let this become a new tradition. It simply could not continue.

The next day, the soldiers – both British and German – were ordered to resume shooting at the same men they had met in a friendly gesture only hours earlier. The “Great War” continued through four more Christmases, but there would never be another Christmas truce.

(Written by Colleen Fliedner, author of In the Shadow of War.)