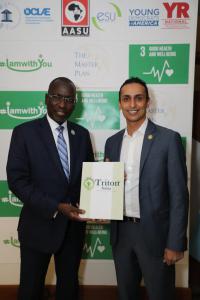 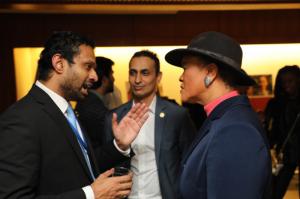 MANHATTAN, NEW YORK, USA, December 25, 2019 /EINPresswire.com/ — The Master Plan initiative unveiled its global campaign called 'I AM WITH YOU' (#IAmWithYou). This campaign focuses to raise awareness of, and provide resources for, the millions of young people around the world suffering from depression, loneliness, and suicidal ideations that can accompany them. The campaign was unveiled by His Excellency Ambassador Collen V.Kelapile, the Chair of the ambassadorial Advisory Board of The Master Plan, at the Permanent Mission of Botswana to the UN. This event was in presence of a diplomatic crowd comprising of His Excellency Ambassador Rodrigo A. Carazo Zeledón, Permanent Representative of Botswana to the UN, a member of the Advisory Board of the Master Plan, and His Excellency Ambassador Mr. Lang Yabou, Permanent Representative of Gambia to the UN.

The Triton Solar is the initial sponsor of this global campaign. Triton Solar who is a staunch supporter of United Nations Sustainable Development Goal-13 also takes a role in supporting this grieving concern. The CEO of Triton Mr.Himanshu Patel who was a guest at the event, met with Ambassador Kelapile- Chair of the Advisory Board of the Master Plan and Mr.Christo Thomas, Chair of the Core Committee of the Master Plan, and extended his enduring support to this campaign. In his meeting, Mr.Himanshu also highlighted that "as a father, I am concerned about my kids and every other kids future and this campaign is a need of the time". Mr.Mohammed Alam- the national Vice President of the Young Democrats of America was a guest note speaker.

The President of the Young Democrats of America Mr.Joshua Harris-Till and Mr.Rick Loughery- the Chair of the Young Republican National Federation are Core Committee members of this global consortium which now has 109 national student unions, and 14 youngest Parliamentarians(expecting to have 50 more young Parliamentarians by the official launch of the Master Plan). His Highness Sheikh Khalid Bin Hamad Al Khalifa, Kingdom of Bahrain, is the Brand Ambassador of the Master Plan.

#IAmWithYou campaign believes that the best remedy to overcome the grieving issue of suicides and depression is to express one's support and friendship to each other and share their concerns. The highlight of this campaign and the Master Plan initiative is the student and youth leaders from around the world irrespective of their ideology, and other rationals, came together to support this campaign. They believe that the UN is the best platform to undertake this issue and then take it to countries. This campaign will also focus on how to tackle the youth obsession on social media which they found as one of the worst causes. However, the campaign also uses the social media platform, but to market, advertises, and requesting the youth to be more social than in social media.

Triton Solar has expressed interest to sponsor the official campaign launch of the #IAmWithYou campaign planned for the end of January at the United Nations Headquarters in New York. The Master Plan was designed by Collegiate Congress Inc. leading student advocacy organization in New York. Chair of Collegiate Congress Inc. and of the Master Plan Core Committee Mr.Christo Thomas mentioned that he and his team have met with the World Health Organization delegation in Ne York to support this campaign and is expecting a positive response from them. Early January his team will be meeting with UNICEF for the same.