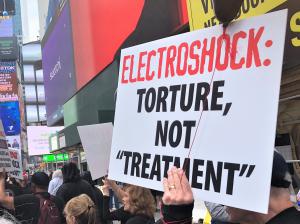 With no clinical trials proving its safety, electroshock treatment plays Russian roulette with the lives of vulnerable people who are often ill-informed about its long-term effects, including, according to an ECT device manufacturer, permanent brain damage.

Electroshock can be given without a patient’s consent, a practice several United Nations reports equate with torture.

Parents who consent to ECT on behalf of minors are also misled into believing that inducing a seizure, which ECT does, is vital for a child’s mental health. Nothing could be further from the truth.”
— Jan Eastgate, president of CCHR International

CLEARWATER, FLORIDA, UNITED STATES, October 1, 2019 /EINPresswire.com/ — In a continuing series about the use of electroshock treatment (ECT) and this practice putting at risk a reported 100,000 Americans every year, Citizens Commission on Human Rights International (CCHR), a mental health industry watchdog, says electroshock can be given without a patient’s consent, a practice several United Nations reports equate with torture. “Parents and guardians who consent to ECT on behalf of minors are also misled into believing that inducing a grand mal seizure, which ECT does, is vital for a child’s mental health. “Nothing could be further from the truth,” Jan Eastgate, president of CCHR International, said. She points to the United Nations reports that say coercive ECT is torture.

In 2013, the Report of Juan E. Méndez, then UN Special Rapporteur on Torture, that ECT (even given with anesthetic and muscle relaxants) may cross a threshold of mistreatment that is tantamount to torture or cruel, inhuman or degrading treatment or punishment. Specifically, he called for “an absolute ban on all forced and non-consensual medical interventions against persons with disabilities, including the non-consensual administration of psychosurgery, electroshock and mind-altering drugs….”[1]

A July 2018 UN Human Rights Council report on “Mental health and human rights,” also called on governments to recognize that forced psychiatric treatment, including ECT, “as practices constituting torture or other cruel, inhuman or degrading treatment or punishment….” [2]

“ECT consent does not mitigate the torture. When a patient is involuntarily committed to a psychiatric facility, their right to consent may be waived, which by international human rights standards also constitutes torture,” Eastgate said.

Statistics on the rate of involuntary committed patients receiving ECT in the U.S. is not publicly available and often requires requests through State and Federal Freedom of Information Acts. In its submission to the Food and Drug Administration (FDA) in 2016, CCHR pointed out the dearth of statistics on ECT’s usage generally in the U.S. and lack of oversight over a practice that can cause permanent memory loss and brain damage.

CCHR filed FOIA requests for stats on ECT usage, with 27 states responding and 19 admitting they allow the use of electroshock to children, including seven states using it on those aged “zero to five.” This is despite four U.S. states banning the use of ECT on minors and the World Health Organization’s Resource Book on Mental Health, Human Rights and Legislation also says: “There are no indications for the use of ECT on minors, and hence this should be prohibited through legislation.” [3]

According to a study published in Proceedings of the National Academy of Sciences an extensive long-term follow-up study indicates that “most ECT patients will never recover from the damage in the form of persistent severe mental deficits.” [4] ECT researcher, psychologist Harold Sackeim admits that “virtually all patients experience some degree of persistent and, likely, permanent retrograde amnesia” (memory loss of events prior to ECT.) In a study published in Neuropsychopharmacology, Sackeim and colleagues acknowledged that ECT may cause permanent amnesia and permanent deficits in cognitive abilities, which affect ability to function. [5]

The FDA’s Final Order on ECT specifies that the ECT device should be reduced in risk classification for treatment of four “disorders.” The agency’s response to the UN reports CCHR referred them to was that the UN hadn’t specified these disorders. Eastgate notes however that “electricity doesn’t differentiate a mental condition when it charges through the brain and body. Physical damage is damage no matter what the state of mind, no matter whether consent is given or not. Torture is torture.”

When the FDA was questioned about the number of patients that are subjected to ECT involuntarily, the agency claimed that the practice “is uncommon and, when it occurs, requires a judicial proceeding.” CCHR charges that this misleads Congress and other legislatures. Including the District of Columbia and Puerto Rico, a Journal of the American Academy of Psychiatry and the Law report says there are 33 geographical jurisdictions where the state laws and administrative codes do not even comment on the use of ECT. [6]

The U.S. is a signatory to the UN Convention against Torture and Other Cruel, Inhuman, or Degrading Treatment or Punishment (CAT) which requires it to take measures to end torture within its jurisdictions and own laws. For purposes of the Convention, torture is defined as an extreme form of cruel and inhuman punishment committed under the color of law.

Under U.S. legislation and regulations, CAT requirements are understood to apply to acts of torture committed by or at the acquiescence of a public official or other person acting in an official capacity. [7] CCHR argues that under involuntary commitment laws, psychiatrists, as agents of the State, are being allowed to torture with impunity.

The FDA should be brought before Congress over its defiance of the UN recommendations, CCHR states. Instead of protecting citizens, it is allowing electroshock torture to be passed off as “standard” medical care, when the entire practice of ECT should be abolished.
More than 90,000 people have signed CCHR’s online petition to ban electroshock. More are encouraged to sign this and also to report any incident of ECT damage to CCHR.

About CCHR: Initially established by the Church of Scientology and renowned psychiatrist Dr. Thomas Szasz in 1969, CCHR’s mission is to eradicate abuses committed under the guise of mental health and enact patient and consumer protections. L. Ron Hubbard, founder of Scientology, first brought psychiatric imprisonment to wide public notice: “Thousands and thousands are seized without process of law, every week, over the ‘free world’ tortured, castrated, killed. All in the name of ‘mental health,’” he wrote in March 1969. For more information visit www.cchrflorida.org

Electroconvulsive “Therapy” —The Facts about ECT