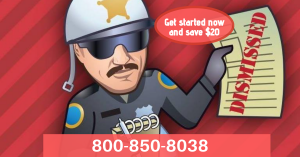 We have seen an uptick in the number of tickets served in San Diego. Luckily, TicketBust has a proven process for getting drivers off without going to court or paying expensive attorney fees.”
— Steven F. Miller

SAN DIEGO, CA, UNITED STATES, June 13, 2019 /EINPresswire.com/ — There are few things in life more annoying than running late for work and then getting stopped for a traffic ticket. Unfortunately, it is a feeling that almost every California driver has either felt themselves or knows someone who has experienced it. TicketBust is the original ticket buster and has helped tens of thousands of people get their tickets dismissed throughout the State of California.

Since tracking the individual county in which tickets are received and the corresponding services are provided, there have been a handful of counties that stick out as being most common. One of them is San Diego County, where a significant portion of TicketBust clients received their tickets. In fact, on June 5th, the 5,000th ticket received from San Diego drivers came in as a phone call from a person caught speeding on Interstate 5 near Sea World.

It was no surprise that a speeding ticket was the type of citation that was received, since this type of San Diego traffic ticket sent to TicketBust make up approximately 65% of all violations. Additionally, it is no surprise that it occurred in 2019 as the total number of traffic ticket help requests in San Diego received by the company has grown tremendously over the past 6 months.

As TicketBust President/CEO, Steven F. Miller explains, "We have seen a significant uptick in the number of speeding tickets being served in the San Diego community. Luckily for these drivers, TicketBust has a well proven process for getting them off without having to go to court or pay expensive attorney fees."

The process mentioned above is called a trial by written declaration and TicketBust has mastered the process of successfully completing this little-known secret to avoiding traffic ticket consequences. Most people don't read the back of their tickets so they don't realize it is an additional option to the standard 'guilty' or 'not guilty' pleas. Or, if they do learn about it, many people don't even know where to start when it comes to filing a trial by written declaration that would be taken seriously.

However, as more people learn about it and reach out to proven ticket fighter, TicketBust, the greater the likelihood of tickets in San Diego County to be dismissed. The ticket fighting team says that it is difficult to tell if the increase in tickets served in the area means that more tickets are being given, or if it is simply a signal that more drivers are aware of their services. Either way, congratulations to the 5,000 drivers that have had their San Diego tickets dismissed.

Our Clients Describe it Best!

Here is what one client recently said, “TicketBust cleared me for 3 citations. I highly recommend Ticketbust to anyone whose got a traffic ticket." – Ray

And another client says, "I have used them and found them very professional and honest. I recommended to many friends and family. They all got their tickets dismissed. I highly recommend them." -Lalarukh