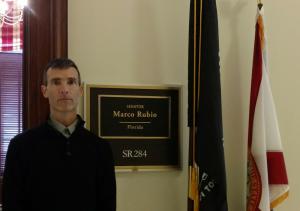 Florida is one of the small number of states that recognize a cause of action for spoliation of evidence, crime victim and survivor David Howe discovers

"I’m not an attorney," acknowledged David Howe. "But I've executed a number of fairly complex NDA's and contracts in my career as founder, president, and chief executive of America's largest issuing CRA for the communications industry – SubscriberWise. I’m not a doctor either. But, if I accidentally cut my finger – which has definitely happened before and will certainly happen again – while slicing an apple and, after a quick shriek of pain and ouch, I see a red liquid circulating at the location of the cut, then I know that what I am seeing is called 'blood'.

"Yes, it’s blood and I, the non-physician, actually made the diagnosis all by myself," Howe proudly declared. "I didn’t even have to call the fire department, or rush to the ER, or call my primary physician with the pressing and difficult question about what the thick red stuff happened to be. Had I not known what it was, however, it may have been very scary for me. I'm sure it would have frightened me.

"Therefore, despite the fact that I don’t have a medical degree or am not licensed to practice medicine, this doesn’t also mean that I remain hopelessly ignorant about some medical knowledge and insight — otherwise obtained by professionally trained and licensed physicians who have years of education and training, for example.

"I mean, I'm not a plumber, but I do know how to flush my own toilet," Howe added. "I'm also not an electrician but I've changed at least one hundred light bulbs in my life. I'm not a mechanic, but – believe it or not – I actually know how to put air in my car tire. I'm certainly not a rocket scientist but I know the thing traveling high and fast into space is called a 'rocket'. And best of all, although I'm quite incompetent as a chef, I have indeed learned how to neatly and generously spread peanut butter and jelly onto wheat toast for an amazing afternoon snack.

"Oh, and lest I forget…I even know how to measure detergent for the wash tub, sort my own clothes, and end up with a clean load of laundry after transferring from washer to dryer and even pressing the start button without calling mom! Yes, it's amazing how much I know — how much I can accomplish — despite my lack of official credentials, professional licenses, and other specialized training, education, and academic degrees.

"The point here is simple," Howe asserted. "The point here is obvious. Like the vast majority of reasonably educated individuals, I can read and I can understand. Surprise, I actually have some common sense too. Yes, that happens for people like me — who have been around for a half-century and counting. We learn a thing or two. We see a thing or two, over those long years and decades," Howe emphasized. "We're not all dummies. We're not all fools. And we're not all suckers.

"And that's too bad for companies like Enterprise Holdings," Howe noted.

"So, the fact that a corporation – namely Tortfeasor Enterprise Holdings' and its companies National, Alamo, and Enterprise Car Rental – which was immediately notified about crucial evidence related to a pending civil case — and even an active criminal investigation by Lee Port Authority Police — would not maintain, copy, and safeguard evidence that would profoundly reveal conspicuously critical information is patently absurd.

Related: Tortfeasor claims NO SURVEILLANCE in possession, UNDER COURT ORDER to produce. However, listen to the audio and hear 'we're looking at the footage…' https://soundcloud.com/user-370781554/national-car-rental-damage-recovery-scam

"Sadly, however, that’s exactly what happened," sighed Howe. "It's true. Yesterday, to my shock and dismay, I learned that the Tortfeasor Enterprise Holdings’ National Car Rental, through its corporate counsel, does not have the evidence demanded through writ of court order and subpoena duces tecum.

"And that seems really hard to believe, even for the non-lawyer David Edward Howe, particularly after the organization admitted to viewing the ‘footage’. For the record, National Car Rental admitted the absence of pre-existing damage. And they ultimately used this as a justification to demand $502.80. They implicated a renter — like they've done thousands and thousands of times before across this nation and without an iota of evidence.

"Without a trace of proof.

"Without a shred of fact.

"With nothing more than a greedy attempt to extort ill-gotten money from otherwise honest and decent people," stressed Howe.

"In other words, if you just happen to be the last person to rent the car, then the hairline scratch or the minuscule 'dimple' on the bumper — that's undoubtedly been pre-existing on the vehicle for ions — it suddenly becomes your financial nightmare. It suddenly becomes a cash-cow for an industry with a long and dirty record of very bad corporate citizenship. That's a fact.

"And that’s outrageous and anyone with reasonable intelligence and common sense, my guess even a child, would come to this very same conclusion," stated Howe.

"Thankfully — the theft, fraud, intentional negligence, and the disgrace of the ‘good faith and fair dealing covenant’ — all those abuses and more, they were intentionally perpetrated in a state where I also happen to live for part of the year. And that state is Florida…and Florida has state and federal courts that do not appreciate this bad behavior. Florida, thankfully, likes to punish and sanction this bad behavior on open dockets and for the inhabitants of the world to know, see, and understand. And, hopefully, to share and proclaim with their family, friends, neighbors and any one else who they don't want to see victimized by a predatory and shameful scheme.

“A spoiler or destroyer. It is a maxim of law, bearing chiefly on
evidence, but also upon the value generally of the thing destroyed, that
everything most to his disadvantage is to be presumed against the
destroyer, (spoliator,) contra spoliatorem omnia proesumuntur.”
Black’s Law Dictionary 1573 (Rev. 4th Ed. 1968).

"So I intend, as the non-lawyer that I am, to nevertheless investigate what my options are and how I can pursue drastic sanctions through the Lee County Civil Justice system," Howe contined. "It's the appropriate thing to do, despite the fact that I have publicly and sincerely forgiven the wrong doers who engaged in this painful and horrific criminally punitive financial scheme: https://www.businesswire.com/news/home/20180510005859/en/SubscriberWise-Enterprise-Holdings-Corporation-Continued-Citizen-Mistreatment . The wrongdoers, I strongly contend, are mere victims of the predatory system that Congress has enabled through their inaction and failure to get things done.

"Remarkably, the behavior in the car rental industry is not too far removed from the identity fraud abuse of babies, girls, and boys — for which I proudly and aggressively defend with vigor, compassion, and integrity. Yes, each is a crime of financial desperation. And just like the actors at the car rental agency who perpetrated the fraud, as with the child identity theft perpetrators – very often a parent or guardian – I too forgive them. I only very rarely seek criminal sanctions with the state. Instead, I offer awareness and education.

"And for lawmakers and the others, I demand prevention. I demand action.

"Today I want to add the car rental industry to the list.

See more about Enterprise and the related CIVIL THEFT case making its way through the civil justice system in Lee County Florida, the scene of the predatory encounter.